I have finally finished my swoon quilt.  I took my time at the end because I really loved working on this quilt and I didn't want to rush anything. 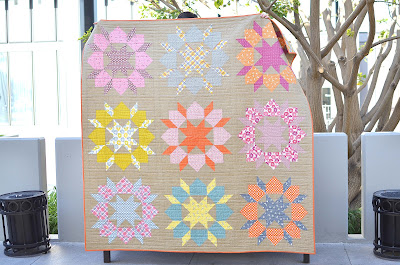 I debated about how to quilt it, but after seeing some done with straight lines (and since I think straight lines look great on almost anything) I went with straight lines a little over an inch apart.  In my mind the lines were vertical, but my husband held the quilt up sideways (there isn't really an up or down since it is a sqaure and my prints aren't directional, that's just how I thought of it) so here they are horizontal.

I think that white would have made a great background, but I am glad that I went with the darker color because I intend for this quilt to get a lot of use and my kids aren't very good at keeping white things white!

I couldn't decide if I should use the plaid or the blue print for the back, so I used both with a strip of quilter's linen in between. 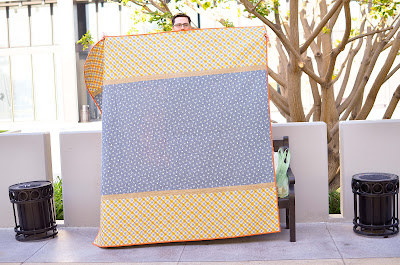 My husband was kind enough to hold the quilt for me again outside of his office building, but I get the feeling that this is the last quilt that will be photographed in Century City for a while (he wasn't super excited about it).

The only thing that I didn't love about the process was the flying geese.  I ended up using the Fons and Porter flying geese ruler and I probably wouldn't do that again because I ended up with a lot of clipped points (though I am sure that was totally my fault).  Other than that everything lined up pretty well. 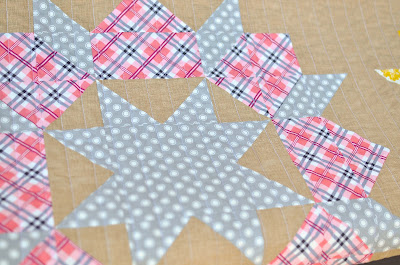 The swoon-a-long has now moved on to the On a whim/hopscotch patterns.  I hadn't planned on joining in again, but I am going to do Hopscotch (but I am not starting it for another month or so).

The Nina Quilt in Love Always, AM

The Nina Quilt in Sundance

The Nina Quilt in Moonglow